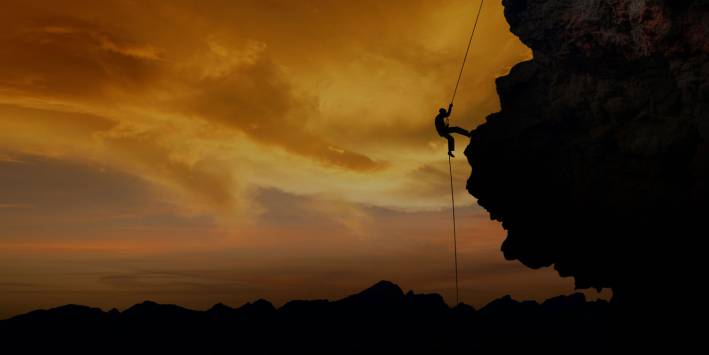 Think about your life. Does it feel mostly free of stress, pressure, and risk? Do you always know what to expect? If so, the life of your dreams may be in jeopardy.

Comfort zones may sound great in theory, but if you never leave them, they rob you of a life filled with vitality. What we think of as a safe haven may in reality be a limiting prison that offers mediocre rewards at best. Fortunately, you can learn to crush your comfort zone and start creating a life more aligned with your dreams.

What Is the Comfort Zone?

Different industries, from sports to business, use the concept of expanding the comfort zone to encourage peak performance.

Imagine a small circle in the center of a piece of paper. This is your comfort zone, your “happy place” where you feel as cozy as a hobbit. Here, you efficiently perform the routines that keep regular life humming along. The problem is, nothing extraordinary happens.

Now imagine a medium-sized circle around the small circle. This is the learning zone. Here, you’re doing new things, learning new skills, and meeting new people—and your anxiety and discomfort are elevated because you feel vulnerable.

Now imagine a big circle around the others. This is the danger zone, which can be hazardous to your health. It’s the place where you become so overwhelmed and overstressed that you can no longer function.

We’ll explore these zones in detail but first, meet some people who pushed against their comfort zones and were richly rewarded. 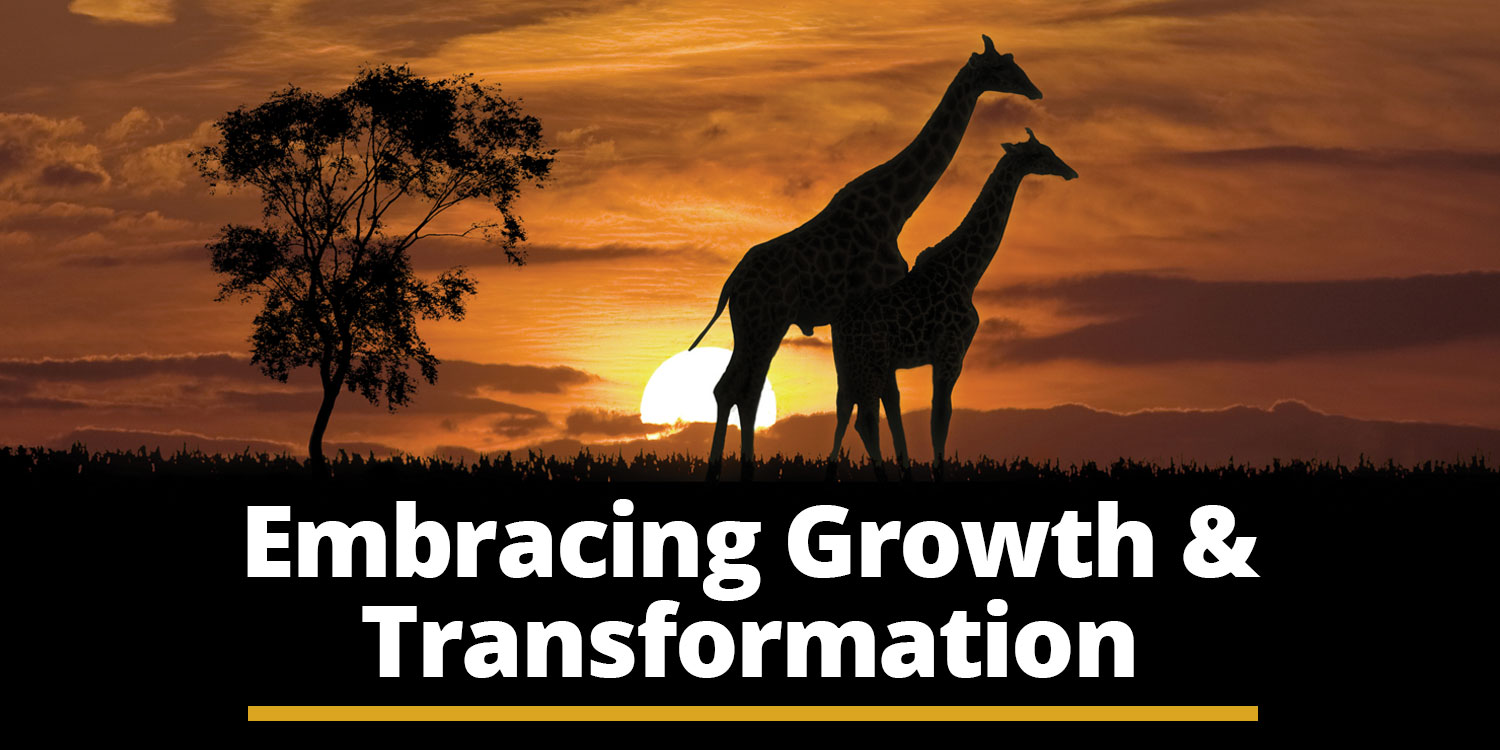 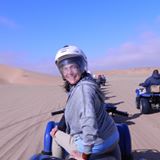 Heidi Boone had dreamed of seeing giraffes in the wild since she was 5. But after signing up for a group tour of Namibia in southwest Africa, she started getting nervous. She didn’t know what to expect and she would be traveling with people she’d never met.

“All my fear went away when my flight was over the Atlantic and I saw the continent for the first time,” she recalls. “It was worth all the days and weeks of fear leading up to it.”

But when the plane touched down after a 20-hour flight from Boston, Boone discovered the airline had lost her luggage. In the midst of a mini-meltdown in baggage claim, she had a “eureka moment.” She realized she didn’t care if her luggage was ever found. She had exactly one hour to shop for clothes and toiletries and that’s what she did.

Later, when she got her first glimpse of a giraffe, she grabbed her camera, only to have it freeze on her. She told herself to put the “damn camera down and pay attention to what really matters. It was one of the most golden moments of my life.” 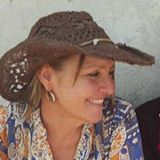 Susan Welch was working as a positive psychology coach with corporations in Australia when she realized she was no longer happy. An empty-nester, she felt as if her soul was screaming at her because her life did not reflect her most important values: freedom and altruism.

In 2012, she began traveling to different countries. She thought she would end up in the UK but instead fell in love with Nepal. She was there in the spring of 2015 when the country endured one of its worst earthquakes. She gave up her home in Australia and now runs Voluntour Nepal, a company that combines eco tours and adventures with volunteering opportunities that help rebuild the country’s infrastructure. “It’s about the legacy you want to leave,” she says. 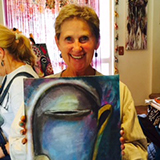 When Mira Furth was laid off from her human development job, she thought she would rebuild her life-work coaching practice. But it never took off the way she expected. She slowly realized it was because, deep down, she was no longer excited about what she did.

She recalled a 1995 mask-making class she’d taken with other therapists, and remembered how the kinesthetic experience of painting “busted open” something inside her. She followed that thread, taking a painting course where she learned a technique that releases feelings of judgment about the end product.

She formed a group for people in transition who wanted to access wisdom through the creative process in a way that shed light on the next step of their journeys. Furth was coach but also participant—a new, sometimes uncomfortable identity for someone whose career had been built around being "the knower."

The practice of coming to peace with not knowing has helped her with her husband’s cancer diagnosis. She reminds herself that fear tells her stories about things that may never happen and distracts her from being present. “Do I put him in the grave today and start mourning or do I remember that I actually don’t know what this means? I can come up with 20 stories or just be with him,” she said. “I’m at a time in my life where I have a lot of intellectual wisdom. It’s the practice of actually living it when the rubber meets the road.” 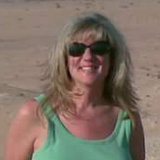 Barbara Zadina was working in international policy communications in Washington, DC, when she was offered a gig with the USAID. The project was in Jordan, a country bordered by Saudi Arabia, Iraq, Syria, Israel, and Palestine. Her first reaction? “You’ve got to be kidding me.”

She’d assumed the Middle East would be a part of the world she’d never see. She remembered cutting out articles of the Arab-Israeli conflict for an entire year in her seventh grade social studies class. But swayed in part by the enthusiasm of her potential coworkers, she accepted a short-term consultancy assignment.

There were moments that petrified her, like a week spent in Palestine. Her Arab taxi driver knew she was nervous. As he was driving up the Mount of Olives, he had her close her eyes. Then he said, “Open them.” Spread out before them was Jerusalem’s Old City, with the gleaming gold Dome of the Rock. It was breathtaking and magical. “I’m in the promised land,” she told herself. “I’m in the holy land. This is amazing.”

She stayed in Ramallah, a West Bank city where there’d been recent clashes. Part of each night was spent peering out windows, checking for guns.

Over time, though, “You start to realize people are people everywhere. They’re getting up, having coffee, and taking their kids to school.”

Zadina's work would take her to Afghanistan and Pakistan. Before she left Jordan, she worked as the Chief of Staff for Queen Noor and fell in love with an Arab man. While the marriage didn’t last, Zadina, now back in DC, believes that her years in the Middle East were the best of her life. “If you had told me someday you’re going to live in the Middle East while wars were going on, I would have said you’re crazy.” 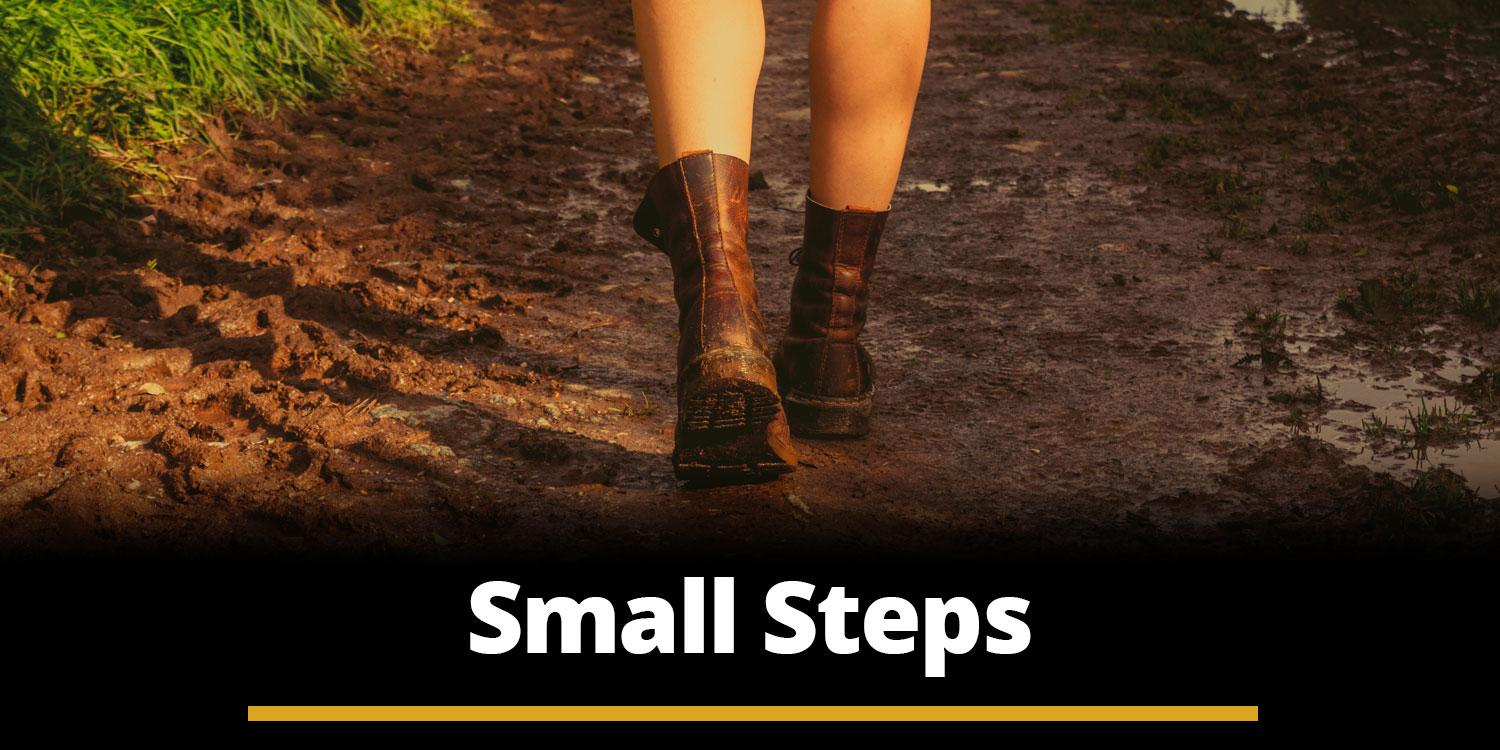 Being in your learning zone doesn’t need to be as dramatic as embracing international travel or reinventing your career. It could be as simple as switching up your routine.

Park City, Utah-based financial planner Carl Richards ends his showers with a two-minute blast of freezing water. Although he’s long known about the benefits of cold showers, it’s not the potential weight loss, increased circulation, or stress reduction that motivated him to act. He decided to take icy showers because they’re uncomfortable. This small daily act reminds him each day of how he wants to live—tackling challenges head-on.

“The world is full of hard and scary things. We are at our best when we can tackle them bravely and confidently, not when we are accustomed to shying away,” he writes in The New York Times. “Think of it, quite literally, as stepping out of your comfort zone. It may be really hard, but just remember that most good things are.”

Like Richards’ showers, entering your learning zone may fill you with dread. You may obsess about what might go wrong. You may fear for your safety. But once you’ve completed a daunting task, you assimilate it into your repertoire of life skills and experiences. In other words, you grow. When faced with another challenge, you recall your accomplishments. This provides the needed encouragement to push against your own boundaries to expand your world.

Some people believe they can avoid discomfort or fear by remaining in their comfort zone. Experts warn that this strategy causes stagnation, depression, and even regression, marked by a distinct lack of enthusiasm for your own life.

“If you stay in the comfort zone, it shrinks,” warns Pema Chödrön, an American Buddhist nun in the Tibetan tradition, in her online course called The Heart of the Matter. “And the older you get, the more uncomfortable and threatened you are by outer things. “

In your comfort zone? Take our quiz and find out! 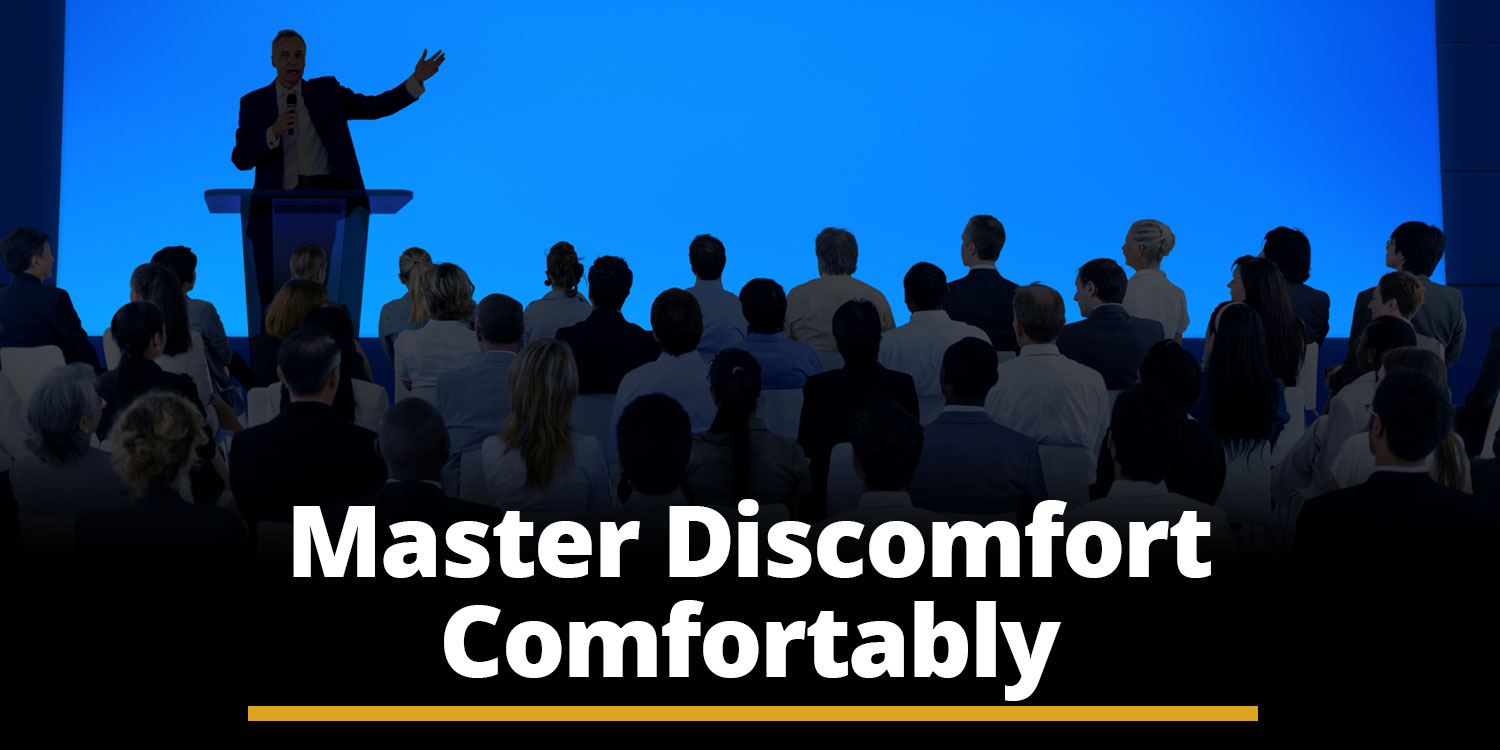 Outside of the comfort and learning zones is the outer circle, called the “excessive risk” or “danger zone,” explains Chödrön. “It’s the deep end of the swimming pool and you don’t know how to swim.”

If you land in this zone, you won’t be able to function because you’ll be too traumatized. Psychology backs this up. In a 1907 experiment with mice, Harvard psychologists Robert Yerkes and John Dodson discovered that while a bit of anxiety leads to improved performance, too much anxiety causes decreased performance.

But how do you stay in your sweet spot without entering the danger zone? Studies show that the best way to do so is intentionally turning up the anxiety a bit when the stakes aren’t high. Practicing a presentation with colleagues before meeting with clients, for example, sharpens your ability to perform well when it matters.

Getting comfortable with being uncomfortable is key, explains Washington, D.C.-based entrepreneur Tom Murcko on his website: www.HowtoLive.com.

Remember the comfort zone is always there to retreat to when you need a rest. But use it as a springboard to an awesome life, not as a place to hide from your own potential. There’s no need to settle for mediocre when you can crush it!

“6 Reasons to Step Outside Your Comfort Zone” by Carolyn Gregoire, www.HuffingtonPost.com, 9/26/14

“Anxiety Can Bring Out the Best” by Melinda Beck, The Wall Street Journal, www.wsj.com, 6/18/12

“The Benefits of Getting an Icy Start to the Day” by Carl Richards, The New York Times, www.nytimes.com, 3/15/16

“Breaking Free from Your Comfort Zone” by Mel Schwartz, www.PsychologyToday.com, 8/8/11 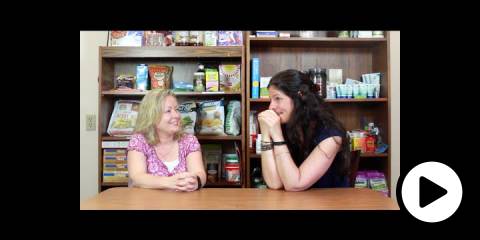 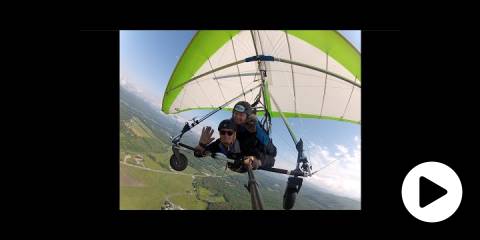 We repurpose spent grain for our line of brew biscuits. There's no alcohol in your dog’s treats. Gluten-free options also available!