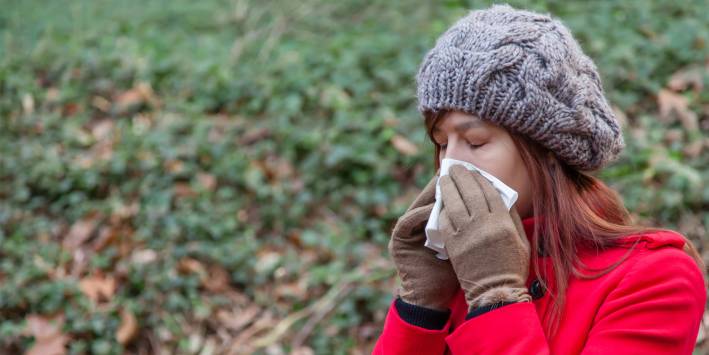 A fall chill may be in the air, but if you’re one of the 40 million Americans suffering from allergic rhinitis, otherwise known as hay fever, a change in the seasons doesn’t necessarily mean a break from sneezing and other allergy symptoms.

Try these herbal solutions to help lessen the severity of allergy-related symptoms, including sinus pressure, runny nose, and congestion.

Ginkgo biloba possesses anti-inflammatory properties, and it may be used to calm allergy symptoms and coughs. Used in Chinese herbal medicine for thousands of years, its ability to ease a wide range of symptoms makes ginkgo a great choice for herbal allergy relief.

Although the name sounds scary, stinging nettle is an affordable and safe herb to try if you are suffering from hay fever, as it appears to act as a mild antihistamine.

This versatile herb, if properly prepared, can be eaten as a vegetable, boiled and added to a soup, or made into tea. It is also available as a supplement in freeze-dried capsules.

Garlic helps treat symptoms such as sinus congestion and coughs, which can plague allergy sufferers at this time of year. With more than 70 active ingredients, this herb can also help to reduce inflammation and boost the immune system.

Because it blooms at the same time as ragweed, the common weed called goldenrod is frequently, but incorrectly, blamed for causing hay fever symptoms. In fact, this herb seems to lessen allergy symptoms by helping to drain sinus congestion and thin mucus. Some research suggests that it might also be able to fight infection and reduce inflammation. Goldenrod can be taken as a liquid extract (tincture), or brewed as a tea.

Kelli Ann Wilson is Associate Editor at Taste for Life magazine. In her free time she enjoys reading, writing, photography, gardening, and spending time with her husband and two kids.