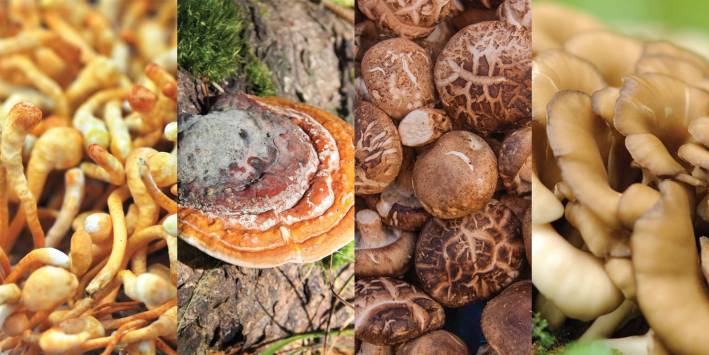 Modern-day living takes a daily toll on bodies that tend to be overworked, undernourished, and sleep-deprived.

It’s no secret that our collective immunity is depleted—the evidence is all around us in the rising incidence of cancer, diabetes, and various immune disorders ranging from AIDS to chronic fatigue. Who would have thought that an antidote to exhausted immunity could come in the form of some idiosyncratic fungi?

Medicinal Mushrooms Have Centuries of Use

The roots, so to speak, of medicinal mushrooms are deep and exotic, reaching back at least 10,000 years, often through imperial China, but also encompassing ancient Egyptian and Aztec civilizations

Hugely popular and widely respected for centuries in the East, these immune boosters are finally gaining recognition and respect among Western practitioners. Why? Not only is their reputation backed up by thousands of years of successful use, but today’s modern research supports many of the early findings about the potency of mushrooms.

Digging Below the Surface of Medicinal Mushrooms

Think about your garden-variety mushroom growing on the forest floor. It occupies a unique space in a carefully balanced ecosystem—somewhere between the living and the dying. “In nature, fungi are the great recyclers,” says Georges M. Halpern, MD, author of Medicinal Mushrooms.

“Some scientists believe that the ability of fungi to break down organic matter is linked to the antidisease properties of fungi. Fungi live in a hostile environment amongst decay on the harshest layer of the ecosystem. There they encounter disease-causing pathogens far more frequently than other life forms.

To survive, fungi must have proactive, healthy immune systems. Some scientists believe that the antipathogen properties in mushrooms are precisely what make them valuable to the human immune system.”

The main purpose of our body’s immune system is to separate the good from the bad and the ugly. A properly functioning system recognizes what belongs and what doesn’t, in the form of viruses, toxins, and bacteria (also known as antigens). Anything hostile encounters an onslaught of white blood cells, which hopefully destroy the invader.

Brilliantly adaptable, medicinal mushrooms (available in capsule or powder form) seem to be able to either boost or soothe the immune system, depending on the individual circumstances.

A recognized superstar in the mushroom field, cordyceps grows under sci-fi circumstances—it germinates within a certain type of caterpillar found in the heights of the Himalayas (and other such lofty elevations), taking over and eventually killing its host. Regarded with awe in China for centuries, cordyceps is considered to be one of the safest of all such herbal remedies. Maybe it’s the challenging growing conditions—14,000 feet doesn’t pose a problem just for hikers—but cordyceps is renowned for imparting vitality and increasing stamina, and it is traditionally used as a tonic for the heart, lungs, and kidneys.

Modern practitioners use cordyceps to treat a range of illnesses from cancer and liver disease to anemia and sexual dysfunction. Studies have shown that, in combination with a healthy diet and exercise, it can lower cholesterol by increasing levels of HDL (healthy) cholesterol, which in turn reduces levels of LDL (lousy) cholesterol. A Chinese study conducted on nearly 300 patients over a period of eight weeks resulted in an overall drop in cholesterol levels of 17 percent. Studies have also determined that cordyceps boosts T-cells and natural killer cells. Additional trials are looking at the effects of cordyceps on diabetes, chronic fatigue, and hepatitis B, a disease that affects approximately 400 million worldwide.

When choosing Cordyceps sinensis at your natural products store, look for Cordyceps Cs-4, a potent, safe form of this supplement.

Another highly regarded Chinese favorite, reishi is often called the king of herbal medicines, outranking even ginseng in herbal potency. Still, its influence tends to be subtle, nudging the immune system toward health rather than overstimulating it.

The “terpenoids” in reishi give it anti-inflammatory properties (and a bitter taste), and its powerful antioxidants fight the damaging effects of free radicals on delicate tissues.

The overall effect—a fungus with a whiff of immortality.

Reishi is used to lower blood pressure and treat diabetes and chronic fatigue, as well as stress. Like cordyceps, it may also help lower cholesterol. This powerful tonic builds stamina and energy, prevents tumors from growing (in China, traditional uses include breast and prostate cancer prevention), and helps detoxify the liver. Its antihistamine qualities have made it a traditional Chinese medicine (TCM) treatment for asthma.

While the Fountain of Youth remains as elusive today as it was 500 years ago, recent studies indicate that reishi may even have a positive effect on aging skin and protect against skin cancer.

A relative newcomer to the fungi pharmacopoeia, shiitake mushrooms appeared on the medical scene in the 1960s when Japanese researchers discovered several regions in the country where cancer was virtually unknown. The common denominator: a diet rich in shiitakes.

Second in culinary popularity to the common button mushroom, shiitakes grow on dead and dying hardwoods in China, Japan, and eastern Asia. Even within the fungi family, shiitake is a nutritional powerhouse, boasting all of the essential amino acids and high amounts of B vitamins.

A substance extracted from shiitakes forms the basis of lentinan, one of the most prescribed cancer treatments in the world (although it’s not approved by the U.S. Food and Drug Administration). One-year survival rates in gastric cancer patients who received lentinan increased by 49 percent, according to one published study.

This drug boosts production of T-cells, which also has led to subsequent testing of lentinan for treatment of HIV (which destroys T-cells). Shiitake mushrooms also contain vitamins, minerals, and proteins that lower cholesterol, and they produce antibodies that may be effective for treating hepatitis B.

Highly valued for their potent medicinal properties as well as their delicious taste, maitake mushrooms grow in temperate forests ranging from Japan to eastern North America, where their clustered ruffles sprout beneath oaks, beeches, and other dead hardwoods.

Among the most widely studied of all medicinal mushrooms, particularly for cancer prevention and its effects on high blood pressure, maitake has a long tradition of increasing stamina and boosting immunity

Current studies are examining the effects of maitake on various forms of cancer, including bladder and prostate. Other research shows that maitake inhibits production of D-galactosamine in the gut, which is related to liver toxicity.

Animal experiments in Japan suggest that maitake may have a double-whammy effect on diabetes, simultaneously increasing the production of insulin while keeping glucose levels under control. Maitake may even slow the production of lipids—that is, fat—which has an overall positive effect on lowering cholesterol.

Most mushrooms lower blood sugar, which is good news for people with diabetes, but not so good for those with low blood sugar. Check with your physician before taking maitake if you suspect your blood sugar levels are low.

Fortunately, today there’s a growing emphasis on preventive healthcare—that is, boosting your immune system to halt disease before it happens. Not so fortunately, evidence of weakened or unbalanced systems is all around us: One in three Americans will face cancer in his or her life; 40 million Americans have heart disease; seasonal allergy sufferers number in the millions.

Immune disorders such as chronic fatigue, diabetes, and irritable bowel syndrome affect increasing numbers. We all know the drill, but it doesn’t hurt to say it again: Eat healthy foods, exercise, get plenty of sleep, and keep stress levels as low as possible. Oh, and throw a few shiitakes into that stir-fry or supplement routine.

With a foot firmly planted in the worlds of both food and medicine, mushrooms offer up a perfect combination of culinary prowess and medicinal potency.

Are medicinal and culinary mushrooms interchangeable? Will cooking your shiitakes be just as effective as taking a supplement when it comes to upping your immunity quotient? Not exactly, although all mushrooms in any form offer health benefits.

However, unlike their above-ground equivalents, medicinal mushrooms, whether capsules or powders, generally use the mycelium—the more potent part of the fungi that grows underground.

Benefits of Vitamins C and D 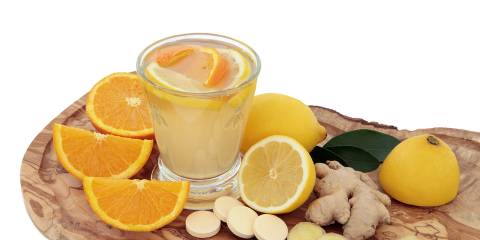 Taking Advantage of the Medicinal Benefits of Mushrooms 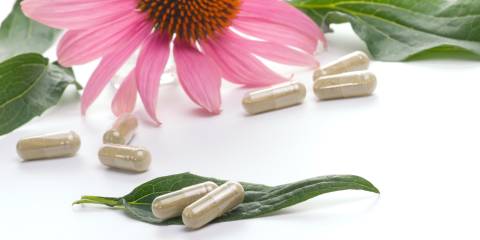