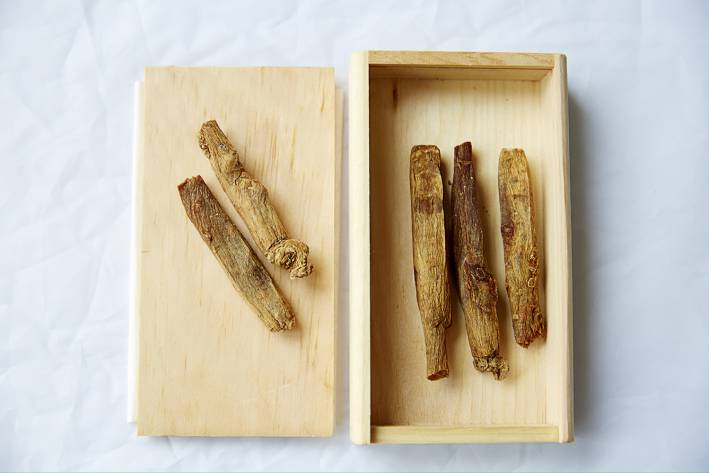 I cannot think of ginseng without conjuring the image of Indiana Jones. Both are often found in the depths of the forest, both are brilliantly adaptive to all situations, both are constantly under attack, and both are powerful enough to survive and thrive. Both are exotic, mysterious, and dare I say, quite good looking—although one has been respected for over 5,000 years, and the other... not so long.

Ginseng is a plant with a root shaped like a human. In fact, the Chinese character for ginseng begins with the ideogram for human. It has also been called the man root, because ginseng harvesters think the root is man-shaped, and also because it is purported to be full of manly virtues. I don’t like this characterization as much, because ginseng is every bit as beneficial for women as for men.

One myth claims that there was a beautiful celestial woman who loved to descend to bathe in the pools in the Changbai mountains in Northeast Asia. Her father was not happy with his daughter’s mountain visits, especially when she fell in love with and married a mortal. Soon thereafter, a lethal epidemic threatened her home and village. She scattered magic seeds all through the forest, and the seeds sprouted into a plant that could cure everyone. Again, her father was displeased, and he imprisoned his daughter in a cave. Her beloved husband died of grief. Not exactly a happy ending to this fairy tale! I am not sure how many, if any, other herbs have this level of mythology, reverence, and history attached to their origin story.

Ginseng is incredibly powerful. It is also incredibly valuable, with large roots worth more than their weight in gold, even to this day. It is so valuable that Emperors of China have gifted jewels and honors to hunters finding unusually old specimens. At one point, all ginseng was reserved for use by the royal family, and commoners were not allowed access to this plant medicine.

Ginseng (Panax ginseng) originated in Asia and is in a class of herbs called adaptogens. Adaptogens boost an individual’s physical and psychological adaptability, creating strength to respond to dangers such as extreme heat, cold, viral infections, injuries, psychological stressors, and even aging itself.

Panax ginseng is not American ginseng (Panax quinquefolius). They are cousins, but their health benefits differ. This article focuses on Panax (Asian) ginseng.

You may hear debate about white or red ginseng. While both forms come from the same plant, white ginseng is very minimally prepared, which means that it’s beneficial compounds, including ginsenosides, ginsans, and gintonins, are too bound up in the plant’s cell walls to be of much use.

Red ginseng, by contrast, is steamed, which breaks down some of the cell walls and gives the root powder a characteristic red/brown appearance. While all ginseng has some benefits, the majority of studies show that the steamed form, called red ginseng, is the most medicinally useful.

The Tragedy of Wild Ginseng

Humans have loved wild ginseng almost to death. Wild ginseng is so valuable because the longer it is in the ground, the bigger it grows. Also, the older it is, the more powerful it becomes as it must defend itself from worms, mold, soil changes, insects, temperature variation and competition from nearby plants. By the time a root is 20 years old, it is extremely valuable because it is extremely powerful.

The demand for ginseng has eliminated most of the wildcrafted sources, and now it is grown on farms, many of which are in Northern China and Korea. Unfortunately, farmed ginseng has many challenges, as the cultivated plant is sensitive to weed competition and a variety of insects.

In order to assure a commercially successful crop, a wide variety of herbicides, pesticides, and fungicides are used on farmed ginseng crops. An article published in Horitcultural Science lists 15 chemicals applied at different stages of the growing process to control such pests as cutworms, slugs, nematodes, gray mold, and root rot.

Also, ginseng plant cultivation takes a long time – about six years between harvests to produce even a minimally effective ginseng. Slow growth allows time for the roots to absorb toxins and pollutants in the soil. Red ginseng has become notorious for contamination with toxins.

Because of these concerns, new ways to grow ginseng have been investigated and developed. Researchers in Belgium are using novel hydroculture growing techniques that result in a much cleaner, more powerful ginseng.

Researchers have recently learned that specific compounds in ginseng, called noble ginsenosides, are not only better absorbed by the body, but have specialized, energizing effects. Noble ginsenosides are found in small amounts in ginseng. One of the problems with modern ginseng cultivation is that it robs the plant of its levels of noble ginsenosides, too. They just aren’t present at levels that may have been the norm for wild ginseng.

While there are commercial red ginseng extracts that focus only on ginsenosides, whole root red ginseng powder offers a high concentration of noble ginsenosides plus synergistic compounds including gintonin and ginsan. These compounds not only improve the actions of ginsenosides, they have independent benefits, too. They have been shown to improve immune defense, inhibit tumor growth, create neural connections, and strengthen the critical functions of the liver.

Whole root powder means the full spectrum of ginseng compounds are present, and have superior benefits.

Because red ginseng works in ways that impact nearly all bodily systems, it can be used for the vast majority of health concerns and illnesses. It would be difficult to find a health problem for which red ginseng would not be useful!