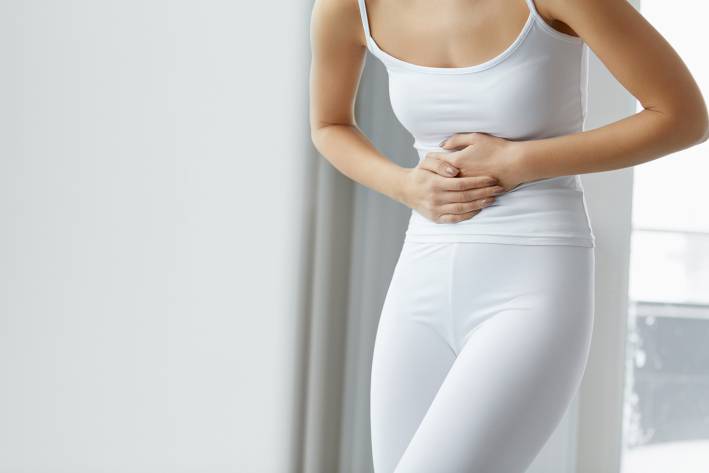 We host blogs from some of the leading voices in natural health and wellness. Please contact Ann Louise Gittleman, Ph.D., C.N.S. with any questions about this content.

Bad bacteria, like the ones that cause food poisoning, could also be causing your SIBO, and surprisingly, Fatty Liver Disease as well.

You’ve heard it from me countless times over the years – your body is only as healthy as your gut. If you can’t digest and absorb nutrients from food and drinks while also fending off foreign invaders, then there’s something wrong with your gut – and that something might be food poisoning.

Ten percent of people who come down with a case of food poisoning don’t recover and it becomes a chronic bacterial infection. When this happens, it can progress into Small Intestine Bacterial Overgrowth (SIBO), and as researchers have recently discovered, it can wreak further havoc and lead to Nonalcoholic Fatty Liver Disease (NAFLD).

The good news is you can beat the bloat and get your gut health back on track with a few simple steps.

Your digestive system is the first line of defense for most of the foreign invaders your body comes in contact with. This complex system has multiple internal lines of defense to keep these harmful invaders from breaching its protective front lines and invading your bloodstream, where they are able to travel pretty much anywhere in the body to wreak havoc.

The digestive cascade all starts in your mouth with chewing and saliva production. Chewing your food thoroughly stimulates the release of saliva, which in turn signals how much stomach acid to make, followed by digestive enzymes from the pancreas and bile from the gallbladder. In your intestines, your microbiome – the collection of healthy bacteria that makes up part of the immune system in your gut and helps you break down and absorb nutrients – gets to work breaking down food and attacking unwanted hitchhikers that make it past the stomach.

When all of this is working properly, it also balances the pH needed in each area and controls how much peristalsis – the wave-like contractions of the intestines – needs to happen to move the food along. The end result is food that is broken down, all the nutrients extracted and sent where they’re needed, and any harmful invaders neutralized and easily eliminated through regular bowel movements.

This delicately balanced system can be thrown out of whack at any point along the course – you don’t chew your food thoroughly, which causes less stomach acid to be released, and then fewer pancreatic enzymes and less bile is released. Or you drink too much liquid while you eat, which dilutes your stomach acid, causing a slow down of the whole system. Or perhaps worst of all, a break down in the microbiome allows bad bacteria to survive, and you now have an illness – like food poisoning – to fight.

Thanks to your microbiome, at least 60 percent of your immune system is in your gut. This is likely because it’s your first line of defense against most of the foreign organisms you encounter. Aside from the food and drinks you put in your mouth, the secretions from your pulmonary system drain into your stomach, and anything you touch before putting your fingers in your mouth also ends up in your digestive system.

If there is any weakness to your microbiome – either not enough probiotic bacteria or not enough diversity – the bad bacteria that cause food poisoning will take over and cause illness, damage, and eventually SIBO (Small Intestine Bacteria Overgrowth). According to researchers, food poisoning bacteria like Salmonella, E. coli, Campylobacter jejuni and Shigella all produce a potent neurotoxin called cytolethal distending toxin B. The more antibodies you make against this toxin, the more likely you are to develop SIBO.

Cytolethal distending toxin B is molecularly similar to a good protein we have in our intestines called vinculin. Because your antibodies can’t tell these two proteins apart, the same antibodies that attack the neurotoxin also attack your good vinculin protein. Vinculin is a “good guy” for the nerve cells in your gut; it stimulates peristalsis in its surroundings. When you have less of this protein then you have weak muscle contractions, which means food stays too long in the small intestine.

This slower transit time gives bacteria the chance to latch on, feed, and overgrow. Once bacteria overgrows in the small intestine, the result is bloating, gas, inflammation (and more), the hallmarks of SIBO. Food poisoning and its resulting gastrointestinal damage is now considered to be one of the major causes of SIBO. But, in the case of E. coli, the damage doesn’t stop there.

From SIBO to NAFLD - How Bad Bacteria Just Get Worse

Did you know the protective lining of the intestines – that separates harmful bacteria from your bloodstream – is only one cell in thickness? It’s true! Normally, there’s a protective mucus layer over this lining that houses the majority of your microbiome. But, when the microbiome gets disrupted, the mucus layer can be destroyed by bad bacteria (or parasites) and invade your body by getting into your bloodstream, causing systemic inflammation.

E. coli is especially heinous, and is a major contributor to Nonalcoholic Fatty Liver Disease (NAFLD). When it overgrows in the small intestine, it gives off alcohol as its byproduct. So this bacteria in particular causes that food to ferment, increasing bloating, the release of toxins, and the production of alcohol. Once it breaks through your intestinal barrier, all of that alcohol floods your system and heads for your liver.

The alcohol produced by bacteria poisons your liver the same way the alcohol you drink does.

It used to be that we only saw Fatty Liver Disease in people who regularly drank excessive amounts of alcohol. Now NAFLD affects more than one-fourth of the adult population in the US. We see it most commonly in people with high carbohydrate diets who are feeding the alcohol-producing bacteria (and yeasts) in their disrupted microbiome. In fact, these alcohol-producing bacteria have been found in more than 60% of NAFLD patients.

Your alcohol levels from the bacteria (and yeasts) can actually go so high that you register a blood alcohol level of intoxication. This is called Auto-Brewery Syndrome and is rare, but should give you a good idea of just how much alcohol these bacteria can make. So, if you’re experiencing bloating, brain fog, inflammation, and fatigue, then it’s time to tune-up your microbiome and strengthen your intestinal border function.

Get Your Gut Health Back in 3 Easy Steps