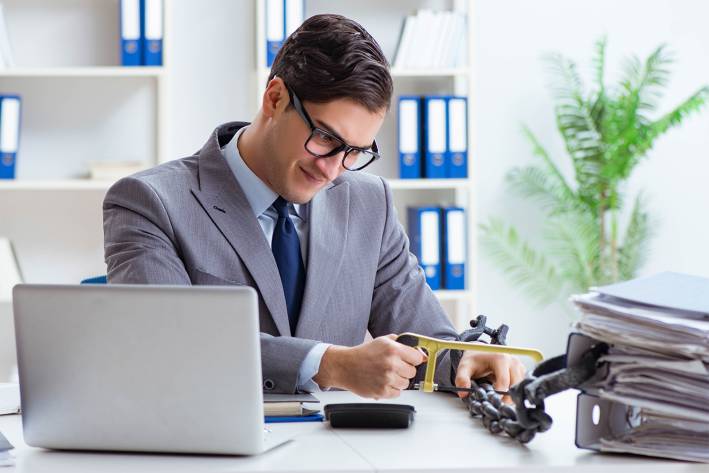 I've been working in the tech field for some time. This of course necessitates long stretches of time in front of a laptop. Before COVID, when I was physically working in the high tech workplace, I noticed that some of my colleagues would sit for endless hours in front of their computers, never getting up to stretch their legs, take a bio-break (what's the secret?) or talk to a colleague about something interesting happening in their lives.

The idea of being glued to your computer is something that tech companies have heavily promoted for their employees over the years. Unfortunately, it was misguided. Studies show that employees are not more "productive" when they're working on their laptops for hours on end. The science bears this out. So do the experiments I conducted on myself to try and see how I could better satisfy work demands while also maintaining my personal equilibrium. As is the case with so many other things, it's all about balance.

There are a number of practical approaches that allow a person to work not only in a more relaxed way but also in a more effective and focused way at the same time. In the corporate world, these are sometimes called "productivity hacks." More than one CEO has said that they are in the habit of taking a short break every 45 minutes or so, which significantly enhanced their productivity.

The value of taking mini-breaks interwoven with computer work is backed up by studies showing that our attention and “mind energy” starts to decline after about an hour or so. In addition, other medical research has shown that excessive sitting has a number of negative health effects. If you work at home, a yoga, Tai Chi, walking or meditation break after about an hour of computer work in the course of the day can be a great way to start becoming more dialed in to your own optimal work patterns.

Back in the day, before we became an excessively work-obsessed society, there was a certain wisdom to taking breaks in time. Apart from purely religious practices, a day off on the weekend afforded people a chance to recharge and refresh themselves before going "back to the grind." Once the weekends became corporatized so that (basically) retail could make more money, the day reserved for R&R on the weekend became like just any other day and an important social and personal boundary was lost. Once that particular existential oasis went away, the notion of 24/7, "always on" became the new normal, aided and abetted by our technology choices.

The idea of having lunch at your desk is another productivity illusion. In my own work life, I eventually came to the conclusion that taking a lunch break outside the office (meeting a friend for lunch or even doing a few errands) made for a much more productive afternoon. So yes: breaks work, and they make you more productive in the long run. Further, as one of my Tai Chi teachers explained, when you spend hours and hours engaged in the "Martian mind meld" with your laptop, the energy in your body rises up to your head. This is not necessarily a good thing. Taking breaks helps redistribute your energy and ground you.

Has Automation Failed Before It Even Happened?

In the 50’s and 60’s, futurists predicted that automation would create a four-day work week and we would have time aplenty for recharging and smelling the roses. Automation is now here in full force, but I will leave it to others more knowledgeable than me to explain why our overall quality of life has gotten worse, not better.

In the meantime, it’s not hard to notice that the workplace in general has taken on a certain Dickensian quality. In this difficult environment, work/life balance is not something that will necessarily be handed to anyone (although there are some enlightened workplaces sensitized to this need). Rather, it’s something that we have to actively cultivate on our own while balancing the needs of work obligations with those involving family, friends, and just plain old life maintenance.

We are not machines nor should we aspire to be even though in the real world we are constantly being reminded that machines and automation are "coming for us." Let them come. We humans have better things to do than to try to emulate them.