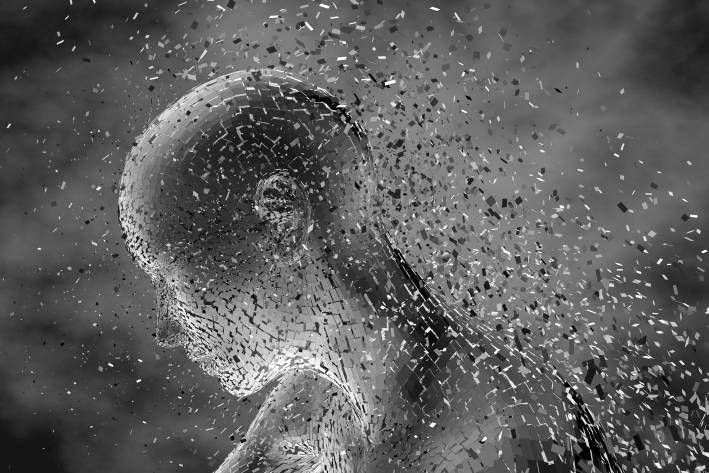 We all struggle with stress and anxiety. Looming work deadlines, final exams, bad news from the doctor, challenging family relationships. This is called situational anxiety—the stressful situation triggers an anxious response. Everyone has this kind of occasional anxiety. I have a little bit of it right now, as I hurry to meet writing deadlines.

However, some people have anxiety every day. This is called chronic anxiety. In fact, over 40 million adults in the United States suffer from some form of clinically diagnosed anxiety, including generalized anxiety disorder, social anxiety disorder, and post-traumatic stress disorder.

You may have heard the expression that a cockeyed optimist, one who perceives things as better than they actually are, “sees the world through rose-colored glasses.” Well, people struggling with daily anxiety see the world through orange-high-danger-alert-colored glasses. Their perception is that the world is even more stressful and dangerous than it is. It is the woman who fears a brain tumor when she gets a headache, it is the man who sees threats to his job security in innocuous statements at work, it is the teen who thinks they are failing if they get a “B” instead of an “A.”

People with serious anxiety are easily overwhelmed. A flat tire ruins their day—maybe a few days. Pleasurable events become a chore—going to parties and farmer’s markets are work instead of fun.

In addition to all the negative emotions, which are certainly painful, anxiety is exhausting. Anxiety pokes our adrenal glands with a stick and they pour out stress hormones which causes heart rate, blood pressure, breathing, perspiration, and elimination to go into overdrive, diverting resources from the gastrointestinal tract, immune system, and other functions.

The brain becomes hyperalert and healthy sleep becomes a thing of the past. The startle reflex increases, and emergency stores of sugar are dumped into the bloodstream by the liver to fuel our increased energy needs.

These are the reasons that people with chronic anxiety can have problems with constipation or loose stools, impaired gut function (irritable bowel is common), insomnia, impaired wound healing, more infectious diseases, hormonal imbalances, and even have a slightly increased risk of cancer. They often report living every single day with a sense of impending doom.

Wherever you are on the spectrum of anxiety—whether occasional stress because the holidays are coming, or chronic problems that interfere with your life—it is a miserable sensation and one that we seek to alleviate. I believe that many people who have problems with drug and alcohol dependence are trying to self-medicate to get rid of their anxiety.

One important way to reduce anxiety is often overlooked because it is so simple. Move your body, hard and fast. Remember, anxiety shifts your body into physical overdrive, so engaging in physical activity immediately reduces some of these unpleasant physical and mental sensations.

I recently had a terrible experience in which my youngest teen son became quite ill after an emergency appendectomy and was admitted to intensive care. He is fine now, but I have rarely been so anxious—and so helpless—in my entire life.

Some days later, I was still anxious even though he was home and improving every day. When I worked out with my personal trainer, I told him what had happened. He decided to change my routine. He made me put on boxing gloves and box for an hour. First, I am not a boxer, and second, I am not big on hitting things. But I did it and I could not believe how much better I felt after that much extreme exertion. I also could not believe how exhausting boxing is!

There are also natural products that can be very useful in helping to restore balance.

Magnesium is an amazing mineral that is essential for our health and well-being, but we often do not get optimal amounts in our diet. Did you know that a traditional Chinese diet provides 300 percent more magnesium than the standard American diet? Magnesium is crucially important for both mental and muscle relaxation.

However, it can be difficult to supplement with magnesium because it is not easily absorbed. If the magnesium is not absorbed, it stays in your intestines. Magnesium acts as a water magnet and pulls extra fluid into the intestines, which loosens the stool and can even cause diarrhea. There is a good reason the laxative Milk of Magnesia works!

So how do we get more magnesium into the body? There is an enhanced absorption system for minerals called chelation. Chelation is a process of binding, and in this instance, the magnesium is bound to (chelated) to an amino acid called glycine. The intestines grabs the amino acid and it pulls the magnesium in after it. This form of magnesium is called magnesium glycinate or magnesium bis-glycinate. People rarely have digestive issues with this form.

The valuable resource Cannabis sativa comes in two versions: marijuana and industrial hemp. And while marijuana is useful in reducing anxiety, since we are talking about supplements and not drugs, we will focus on hemp, and the unique nutrients in hemp oil called phytocannabinoids.

The best known phytocannabinoid in hemp oil is called cannabidiol, or CBD. Clinical work investigating the effects of CBD in specific regions of the brain confirm the compound’s ability to change the blood flow in those sections associated with social anxiety disorder. This preliminary work led to another clinical trial in Brazil that compared CBD to a placebo in volunteers diagnosed with social anxiety disorder along with healthy volunteers as a control group.

People with social anxiety tend to feel overwhelmed with a sense of negative self-evaluations, whether they are speaking in public or simply walking down the street. Since public speaking is one of the most feared social activities for many people, this study featured a simulated public speaking test, and the researchers wanted to see how quickly a single high dose of CBD (600 milligrams) would work to alleviate anxiety symptoms.

CBD from hemp virtually eliminated the anxiety, cognitive impairment (losing your place in the speech), and generalized discomfort for those in the test group. Although this was a limited trial, given the side effects of conventional medications prescribed for anxiety and stress, the fact that CBD worked so dramatically well in such a short time, and for such an overwhelming fear for so many people, is very impressive.

Other trials on anxiety have shown that very high doses are generally not necessary, and have used 20 mg to 100 mg with great benefits. One caveat—make sure you buy from a retailer you trust. Because of the huge popularity of hemp oil and CBD, there are a lot of bogus or adulterated products on the market.

Surprisingly... Echinacea for Your Endocannabinoid System!

Echinacea may be a confusing choice, because all the science on echinacea has been about boosting the immune system. However, it turns out that hemp is not the only plant source of compounds that work with the body’s endocannabinoid system.

There has been some very interesting research done at the Hungarian Academy of Science in Budapest on a unique extract of alkamides from echinacea. This is not a full spectrum echinacea, but a low dose of concentrated compounds that activate cannabinoid receptors in the brain associated with relaxation and feeling calm and in control.  In a clinical study of people with diagnosed anxiety issues, 20 mgs of this extract used twice daily reduced anxiety significantly the first day of use, and even more significantly after seven days of use. There were also no reports of drowsiness or confusion, or other adverse effects. It was shown to be safe, effective, and non-habit forming.

There are so many ways to address anxiety with natural interventions that a book would not give us enough space to do them justice. Lavender, rhodiola, omega-3 fatty acids, kava, L-theanine, bioactive B-vitamins, calcium, and passionflower are just a few more of the myriad supplements that may be useful as you seek to restore balance. It may take some patience and experimentation, but you will find what works best for you.

“The anxiolytic potential and psychotropic side effects of an echinacea preparation in laboratory animals and healthy volunteers” by J. Haller et al., Phytother Res, 3/26/12

“A double-blind, placebo-controlled pilot study of the stimulating and adaptogenic effect of Rhodiola rosea SHR-5 extract on the fatigue of students caused by stress during an examination period with a repeated low-dose regimen” by A.A. Spasov et al.,  Phytomedicine, 4/00

“The effects of an echinacea preparation on synaptic transmission and the firing properties of CA1 pyramidal cells in the hippocampus” by N. Hájos et al.,  Phytother Res, 3/12

“The effects of magnesium supplementation on subjective anxiety and stress: A systematic review” by N.B. Boyle et al., Nutrients, 4/17

“Facts and statistics,” Anxiety and Depression Association of America, http://www.adaa.org/about-adaa/press-room/facts-statistics