During the aging process, it’s normal for the brain to work less nimbly than in years past. Memory’s inevitable decline starts as early as the 20s, although it’s subtle enough that most people won’t notice losing mental ground until after age 60.

Memory lapses usually start small, such as forgetting why you walked into a room, where you put your car keys, or drawing a blank on an acquaintance’s name. This normal part of the aging process is called age-related cognitive decline, with the main signs being memory problems, less aptitude for learning new information, and difficulty concentrating.

People of all ages want to keep their minds sharp—from middle-aged people who may have noticed the first inklings of age-related cognitive decline to older adults concerned with the potential for serious age-related memory problems. Fortunately, memory experts have found ways to retain brainpower.

Adopting a Mediterranean diet—the cuisine typical of the countries bordering the Mediterranean Sea—may be the most powerful dietary route for preserving gray matter. When nearly 2,000 older individuals and their diets were tracked for many years, the benefits of a Mediterranean diet became clear. As a person’s score (representing how closely they followed a Mediterranean diet) went up, their chances of later experiencing cognitive problems such as dementia went down by 10 percent. The Mediterranean diet also showed a clear benefit in terms of memory, language use, and overall thinking ability.

The omega-3 fatty acids in fish account for some of the brainy benefit in this diet. For the greatest benefit, select fatty fish such as salmon, trout, tuna, sardines, and halibut a few times a week. These fish are the richest in a brain-boosting omega-3 fatty acid called DHA. Dietary supplements of omega-3 fatty acids offer a great alternative for those who don’t care to regularly eat fish.

Another tasty way to keep your brain humming along? Blueberries. Powerful antioxidants called anthocyanins in blueberries account for this benefit. Current thinking holds that the anthocyanins boost brain cell connections and communication, as well as the regeneration of brain cells. When older adults with cognitive complaints take either a daily pill of fish oil or anthocyanins, something remarkable happens: Thinking gets clearer.

A specialized type of fat called phosphatidylserine (PS) is found in brain cell membranes, where it facilitates communication among brain cells to aid memory and clear thinking. Clinical research has focused on PS for several decades, particularly in connection to cognitive function of older adults. Research suggests that PS supplements can help safeguard brain function in older adults and can also counteract some amount of age-related cognitive decline. PS, when combined with fish oil supplements, improves memory performance in older people.

Herbal Helpers for Your Brain

Many herbs have the potential to enhance thinking powers. A growing body of research shows that ginkgo, taken alone and in various combinations with other supplements, benefits cognition.

Ginkgo extract supplements show similar effects on cognitive symptoms as that of the dementia medication Aricept, with the advantage of being safer to use.

Curcumin, extracted from the herb turmeric, has been shown to prevent cognitive decline in older people supplementing with it.

All in all, there are a wide variety of potential brain boosters that can provide modest benefits when it comes to memory and cognition. Thinking a little more clearly has never been easier.

“The Impact of the Mediterranean Diet on the Cognitive Functioning of Healthy Older Adults: A Systematic Review and Meta-analysis” by D.G. Loughrey et al. Adv Nutr, 7/17

“Mediterranean Diet and Cognitive Health: Initial Results from the Hellenic Longitudinal Investigation of Ageing and Diet” by C.A. Anastasiou et al., PLOS One, 8/17 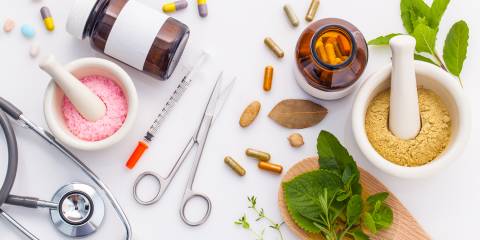