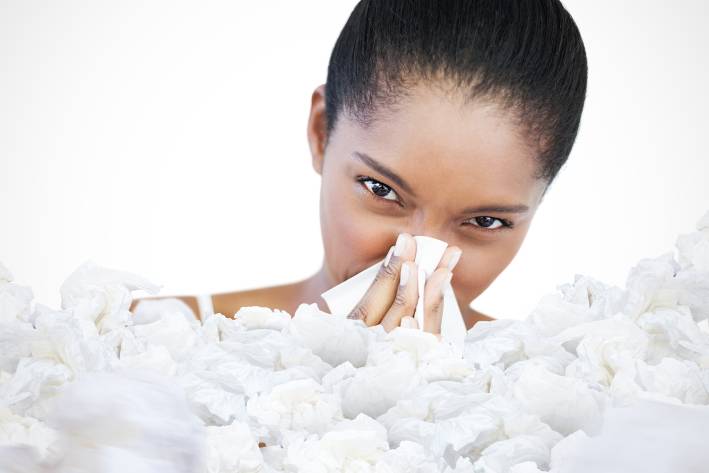 We host blogs from some of the leading voices in natural health and wellness. Opinions and views expressed by the author are their own, and do not necessarily represent those of Taste For Life or its editorial staff. Please contact Dr. Jacob Teitelbaum, MD with any questions about this content.

This is usually associated with sneezing and clear or white nasal mucus. If it usually recurs for the same few months each year, this also suggests grass or pollen allergies (e.g., grass pollen in spring and ragweed pollen, called “hay fever,” in autumn).  If it is year round, allergies to cats and dogs, dust, or molds are common triggers.

Doctors ignore the research on this and continue to make believe there is no such thing, treating sinusitis with antibiotics — which, of course, worsens the yeast overgrowth in the sinuses and makes the sinusitis become chronic (persistent). Candida is also a very common cause of post nasal drip.

This is caused by the chronic use of over-the-counter decongestant nose sprays. As they wear off, they cause “rebound swelling.”

Review information on sinusitis as the potential cause. Treating Candida can not only get rid of the runny nose, but may clear many other symptoms as well.

I recommend the holistic “Sinusitis Nose Spray” by prescription (from ITC Pharmacy at 888-349-5453). After 1 week, it will often settle down allergic rhinitis or rhinitis from over-the-counter nasal sprays. It is wonderful for most chronic sinusitis, especially when combined with other Candida treatments.

Allergy skin testing and shots can also help with persistent and severe allergic rhinitis (I would do NAET first — much simpler and less expensive). Over-the-counter antihistamines like Claritin during the day (not sedating) or Benadryl at night (sedating) are also OK.

Feel well throughout your day.  A single  Melt-well has 12.5mg CBG + 12.5mg full spectrum CBD + 200mg Blueberry Extract – regarded for its great antioxidant support & more! Use code hotproduct for 15% off.