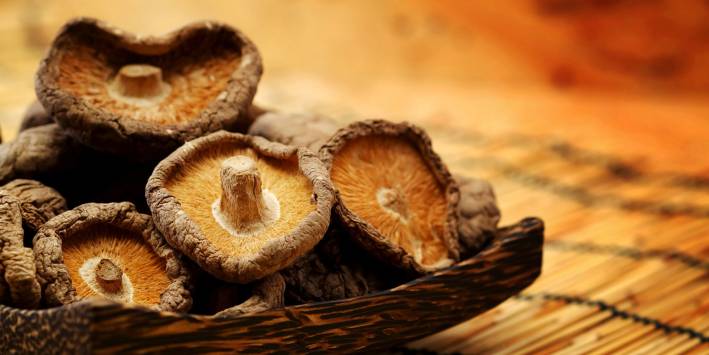 Medicinal mushrooms have a long history of traditional use, coupled with new, cutting-edge research demonstrating their health benefits. Asian cultures share a deep respect for the benefits of mushrooms; the Romans were also fans, dubbing mushrooms the “food of the gods.”

The healing power of medicinal mushrooms—such as reishi, shiitake, cordyceps, maitake, and turkey tail—stems from bioactive compounds called polysaccharides, as well as other compounds that are specific to each variety.

These health-enhancing polysaccharides act as “biological response modifiers.” This means that they support your immune response in resisting infectious diseases and cancer. Beta glucan is the best known and most frequently studied mushroom-derived polysaccharide.

For health benefits ranging from a stronger immune system and sturdier bones to a lower risk of diabetes and a longer life, look no further than vitamin D. You need up to 5,000 IU of this vitamin daily (through a combination of sun exposure, foods, and supplements). Mushrooms serve as the only nonanimal food source of vitamin D. Mushrooms gathered in the wild, as well as cultivated ones exposed to UV light, can provide plenty of it.

Interestingly, both fresh and dried mushrooms will increase in vitamin D levels if simply left in the sun for a day or two. For best results, expose the gill side of the mushrooms to the sun.

Cancer ranks as one of the most researched areas when it comes to medicinal mushrooms. The cancer-fighting ability traces back, in part, to beta glucan, which activates immune system cells (such as macrophages, interferon, T cells, and natural killer cells) to prevent the multiplication or spread of cancer cells. Medicinal mushrooms have been approved in Japan and China for more than three decades as supportive therapies to use alongside standard cancer treatments.

Several mushrooms enhance immune function and fight cancer, including maitake (Grifola frondosa), shiitake (Lentinan edodes), and cordyceps (Cordyceps sinensis), but one that hasn’t received as much attention as it perhaps deserves is turkey tail (Trametes versicolor). A growing number of studies in humans has shown potential benefits from polysaccharide-K (PSK) in turkey tail. For example, in patients with stomach cancer, PSK in conjunction with chemotherapy improved survival rates, while its addition to standard colon/rectal cancer treatment led to fewer recurrences. Lung cancer patients experienced similar benefits when taking PSK.

Reishi, like other medicinal mushrooms, has historically been valued as an “adaptogen,” or general tonic, to promote overall wellness and vitality. In addition to the immune boost that reishi can provide, this mushroom seems to have a special affinity for cardiovascular health through an antioxidant effect.

Reishi is not the only mushroom with cardiovascular benefits; porcini mushrooms (a popular choice in Italian cuisine) have been noted to lower blood pressure in animal-based research. Several medicinal mushrooms have been studied for counteracting diabetes. For example, Agaricus bisporus has amazing potential. When people at risk for Type 2 diabetes consume this mushroom daily, risk factors go down.

The benefits of medicinal mushrooms don’t end here. Promising research continues in the areas of Parkinson’s disease, Alzheimer’s disease, and even allergies.

Use code: ME17 at checkout