After finding significant levels of arsenic in varied samples of popular rice products, Consumer Reports (CR) is calling for regulation of the substance in agricultural practices and, in the meantime, recommending limits on weekly rice consumption.

CR tested more than 200 samples of rice products from well-known companies to store brands, organics to conventional. CR’s scientists found measurable amounts of arsenic in just about every one. Inorganic arsenic, a carcinogen, was found in almost every category, along with organic arsenic.

White rice from four southern states, Arkansas, Louisiana, Missouri, and Texas, which accounts for 76 percent of domestic rice, generally had higher levels of total arsenic and inorganic arsenic in the tests. But brown rice uniformly contained more arsenic than white rice of the same brand in the tests, which CR attributes to arsenic accumulating more in the outer part of the grain that is polished off to refine white rice.

Rice producers, in part, pointed to the organic arsenic naturally present in soil. And Anne Banville, a vice president at the USA Rice Federation, said in a statement there was no evidence of adverse health effects from exposure to arsenic in US rice. “And we believe the health benefits of rice must be properly weighed against the risks of arsenic exposure, which we believe are minimal,” she said.

But she doesn’t speak for the entire industry. Grant Lundberg, CEO of Lundberg Family Farms in California, told CR the company has begun extensive testing of its products for arsenic.

Is Arsenic In My Food Safe?

According to the Environmental Protection Agency, there is no “safe” level of exposure to inorganic arsenic. Its presence in food, though, especially American rice, is not exactly news. Nature reported in 2005  that US rice carries "1.4 to 5 times more arsenic than rice from Europe, India, and Bangladesh."

And in a broadly reported study, Consumer Reports this year found concerning levels of arsenic in apple and grape juice.

But after studying the results of its latest testing, CR is calling for the federal government to set limits on arsenic in rice and ban its use in agriculture.

“Consumers Union believes a standard for arsenic should be set for rice, and industry should accelerate efforts to reduce arsenic levels in rice,” the report reads. “They should also develop types of rice that take up less arsenic, and use rice with the lowest possible arsenic in products for young children, such as infant rice cereal.”

Brown rice uniformly contained more arsenic than white rice of the same brand in the tests.

How Much Rice Should You Be Eating?

To avoid consuming too much arsenic, Consumer Reports recommends:

Read More About Arsenic and Rice 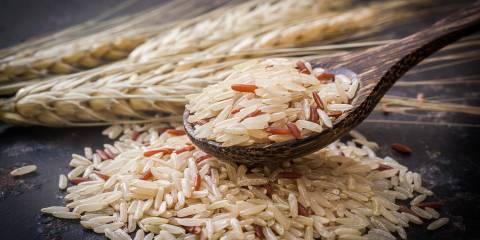 Why Rice Is Super