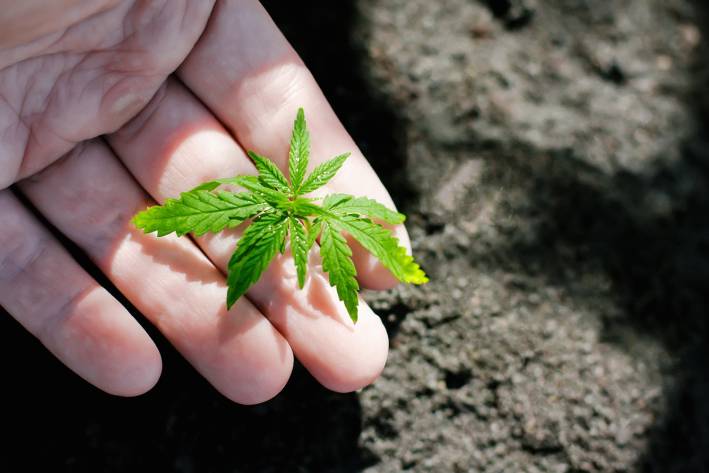 I grew up in the Summer of Love. Tie-dyed shirts, headbands, love beads, Woodstock, peace signs and, if you are going to San Francisco, be sure to wear some flowers in your hair. Many of you will not know what I am talking about, but suffice it was an interesting time to be alive.

There was also an explosion of marijuana use. Its use was linked to the hippies and dreamers and musicians. It was cool.

There was also an explosion of prosecutions in the 1960s of people using marijuana, and it was deemed a dangerous addictive drug and was a controlled substance, illegal to use in any form for any reason. The demon weed. Would that saner thinkers had prevailed, because perhaps then this wonderfully medicinal plant, Cannabis sativa, might not have languished for decades, neglected by researchers and practitioners alike.

Marijuana & Hemp, From Misfit to Medicine

Medical marijuana is now accepted in many states, but it requires a prescription. However, the cannabis product I’d like to discuss is hemp, sometimes called industrial or commercial hemp. Yes, it too is Cannabis sativa, but it is very different from marijuana. Historically, marijuana has been bred for higher levels of a compound called THC, which is responsible for getting high... and maybe craving brownies, too.

Hemp, on the other hand, has been valued for thousands of years for the fibrous stalk, which can be used for fabric and building materials, and so much more. Thomas Jefferson grew hemp on his plantation. Henry Ford used hemp in the construction of the first car bodies. Hemp has been bred for taller and thicker stalks, not for THC. Therefore, the federal government does not consider hemp to be a controlled substance or drug, just as long as the THC is less than 0.3% of the product.

Cannabis sativa is the richest source of compounds called phytocannabinoids. These compounds work in the body by connecting to and modulating the activity of cannabinoid receptors. THC is certainly one such compound, but there are over 100 more members of this powerful family.

The other famous phytocannabinoid is CBD, and if you have not heard of CBD, you must have recently returned from a trip to the moon. It is everywhere—candy, drinks, soap, lotions, dog treats, coffee, hamburgers, and supplements. I am sure that list is not all-inclusive.

CBD (cannabidiol) is the dominant phytocannabinoid in hemp stalk oil. It has been sold on its own as isolated CBD, which is not approved by the FDA. The FDA has approved two isolated CBD-based drugs, Sativex and Epidiolex, for rare seizure disorders, and therefore it considers selling CBD or calling out CBD as selling a prescription drug without a license or prescription.

That hasn’t stopped hundreds of companies from jumping on the CBD bandwagon, though, but I digress.

CBD occurs naturally in hemp stalk oil and hemp stalk oil is legal to sell in the United States as long as the CBD is not called out. Quite the bizarre set of rules, don’t you think?

Hemp oil is well known for its benefits in relieving anxiety. However, there are three other areas in which we see a great deal of interest in the medicinal use of full-spectrum hemp oil: pain, cancer, and seizure disorders.

The full-spectrum phytocannabinoids in hemp oil are natural pain relievers, in part because of their ability to reduce inflammation and modulate the brain’s response to pain.

Since hemp oil cannabinoids help preserve the endocannabinoids made in the body, British research may have demonstrated at least part of the mechanism of action for pain relief. They found that patients with rheumatoid arthritis and osteoarthritis have higher levels of endocannabinoids present in their synovial tissue within their joints compared to those who do not have these painful conditions. It appears that the body floods these areas with endocannabinoids to relieve pain.

Full-spectrum hemp oil can also help people with neuropathic (nerve) pain caused by chemotherapy, which can be very hard to treat because it doesn’t respond well to medications. A small double-blind, placebo-controlled trial showed that phytocannabinoids decreased pain by an average of 24% or more as opposed to placebo, which reduced it less than 6% on a clinically validated 11-point pain intensity scale. Other studies consistently show pain-relieving benefits for the phytocannabinoids in hemp oil.

Research has found that phytocannabinoids from hemp both kill cancer cells and inhibit the spread of tumors—without causing any negative impact on healthy cells.

In experimental research on glioblastoma, a difficult-to-treat form of brain tumor, CBD was found to be beneficial. It inhibited the spread of cancer cells, and improved the activity of other cancer treatments in this scientific study. Though more human research is needed, there may

come a day when full-spectrum hemp oil will be used with other cancer therapies for improved outcomes.

Other scientific research discovered that CBD is very effective against leukemia cells, while additional studies found that the full spectrum of cannabinoids from hemp oil inhibited prostate cancer cells, highlighting the value of a complete entourage of phytocannabinoids instead of focusing on only one.

One of the most dramatic uses of hemp oil is to help people with seizure disorders. Though more research is needed, CBD has already been proven effective in certain seizure disorders, and has shown benefits on its own and when used in conjunction with antiseizure medication.

In a human clinical study, patients stayed on their antiseizure medication (although the authors mentioned that it was no longer controlling symptoms) and took either CBD or a placebo. Half of those using the hemp oil compound were almost symptom free during the course of the trial, and three others noted a significant reduction in symptoms. There were no improvements in the placebo group. This was a high-dose study, with patients using 200 to 300 milligrams (mg) a day.

A recent study from Israel found that a CBD-enriched hemp oil reduced the frequency of seizures in 89 percent of the children in the trial. In fact, there was an elimination of seizures in some of the children. Researchers noted improved language and motor skills, behavior, and sleep. The children included in this study had a type of epilepsy that was resistant to standard medications, so seeing positive results from hemp oil is even more powerful.

Some practitioners comment that combining hemp oil with a ketogenic diet, which has also been shown to reduce seizures could make a remarkable difference for those with epilepsy.

Full-spectrum hemp oil is a powerful natural medicine, but it is important to focus on quality. The best hemp oil provides a full entourage of phytocannabinoids from the stalk because the entourage effect makes all these compounds more powerful than any one on its own.

Hemp seed oil is sometimes used as a healthy carrier, but make sure the product is not 100 percent hemp seed oil, because there are no phytocannabinoids in hemp SEED oil. It’s a great source of plant omega 3s, though.

Also, using hemp oil with meals may significantly improve absorption. Though it is safe to be used on an empty stomach, it may be more effective taken with food.

“Action of cannabidiol on the anxiety and other effects produced by delta 9-THC in normal subjects” by A.W. Zuardi et al., Psychopharmacology (Berl.), 1982

“Cannabidiol-induced apoptosis in human leukemia cells: a novel role of cannabidiol in the regulation of p22phox and Nox4 expression” by R.J. McKallip et al., Mol Pharmacol, 2006

“Characterisation of the cannabinoid receptor system in synovial tissue and fluid in patients with osteoarthritis and rheumatoid arthritis” by D. Richardson et al., Arthritis Res Ther, 2008

“Role of the endocannabinoid system in the emotional manifestations of osteoarthritis pain” by C. La Porta et al., Pain, 10/15

“The therapeutic aspects of the endocannabinoid system (ECS) for cancer and their development...” by M.I. Khan et al., Curr Pharm Des, 3/16